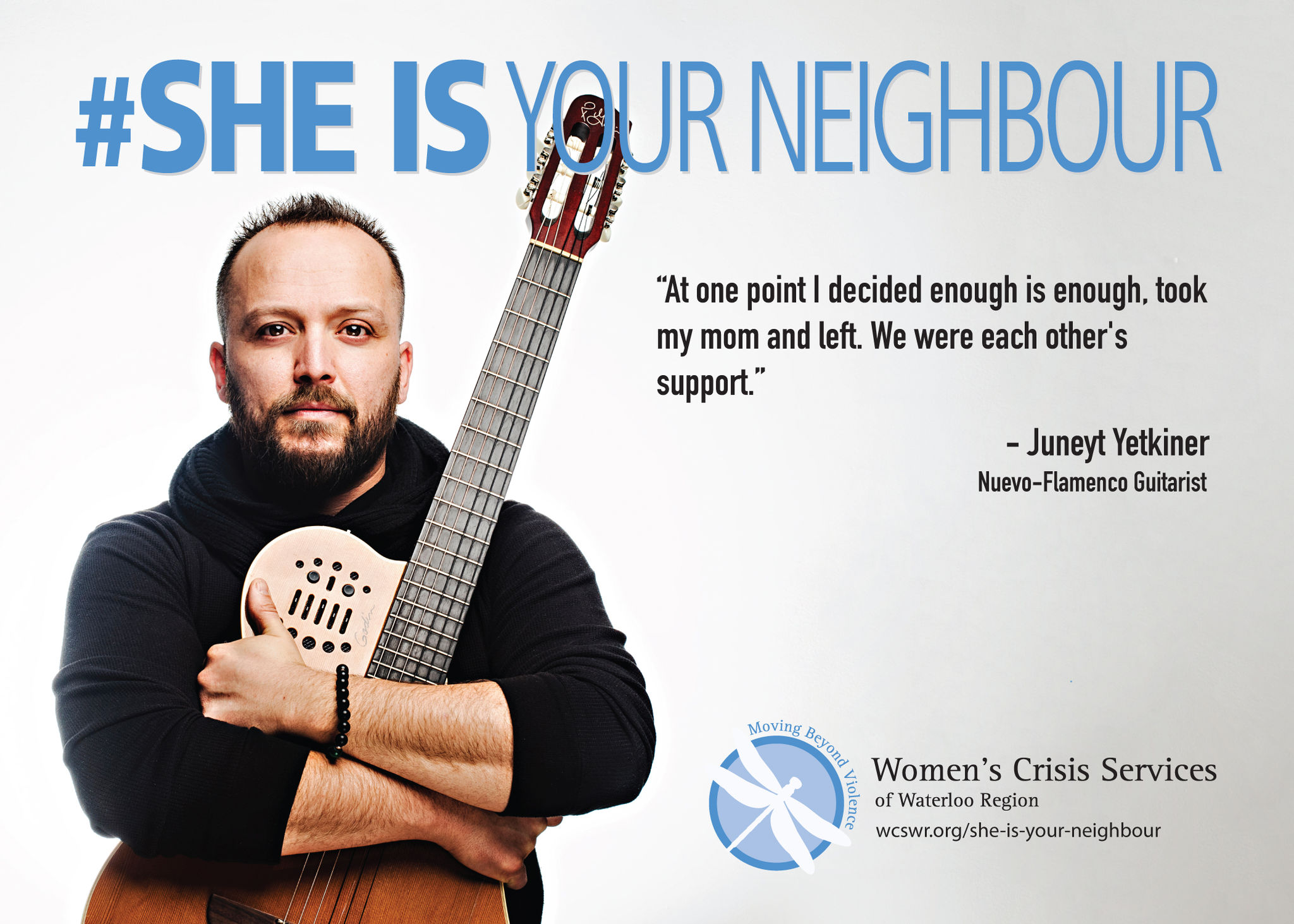 “Really living the dream pretty much is my job,” international musician Juneyt shared. His main musical style is Flamenco, particularly focusing on instrumental Flamenco. “I like that music a lot, I like that styling. It’s more sensitive, it’s from the heart. It’s very soulful,” he said.

When he sings, he often opts for songs that carry themes of love, transforming them into new, Flamenco-inspired versions of themselves. He also writes his own songs.

“Every song has some kind of message to it and a lot of it to do with my past,” he explained.

People often tell him that they love playing his music as background accompaniment while they are working. More recently he has even heard that the soothing quality of his music helps children fall asleep.

“Some kids won’t sleep unless my music is on and that makes me so happy,” he said.

To little surprise, he is regularly sought out to play at weddings and other events, including those for charity.

A Personal Connection to Domestic Violence

For several years Juneyt has worked closely with Women’s Crisis Services of Waterloo Region, regularly donating his time and talents for fundraisers such as WAAM-A-PALOOZA and Hats Off to Mom!

“Pretty much anytime I am needed I will always be there,” he said.

Juneyt says he has a special place in his heart for Women’s Crisis Services because he has known many women who have experienced domestic abuse. In fact, he himself grew up in a home where there was domestic violence.

“My dad was a nice guy at the beginning but something happened to him,” explained. He said his father became both verbally and physically abusive to his mother.

Not only did the abuse impact his mother, it also weighed heavily on both he and his sister.

“It was hard for us too because as a child you see it first hand,” he said.

For those who do not experience it personally, domestic violence can be difficult to comprehend. Telling someone to leave an abusive situation is easier said than done, Juneyt said.

“For the outside person it’s easy to say that. Everybody said that to my mom, “Leave him.” But how is she going to leave? Do you understand what is going on?” he said. There are many barriers to leaving, Juneyt explained.

When he grew older, he was able to help his mother escape the abuse that she was experiencing.

“At one point I decided enough is enough, took my mom and left. We were each other’s support. My mother is an immensely strong women.”

He explained that his grandparents were a big help to them at the time.

“At one point I decided enough is enough, took my mom and left. We were each other’s support. My mother is an immensely strong women.”

The Consequences of Normalizing Violence

Juneyt has witnessed how domestic violence is often normalized and accepted in many places.

“It is hard for a woman, especially in Third World or developing countries, because there are a lot of patriarchal men-driven societies,” he said. “In a culture like ours at the time, which is a very modern culture similar to Canada, unfortunately violence happened. We stood through that.”

At a young age, he had started to question whether he agreed with the societal norms.

“I had a lot of things going on my mind at the time. In my mind I was like, ‘this is so unfair because it’s a man’s world letting us survive easily, but women can’t.’” he said. “If women don’t speak up it is because they have been weakened in their soul.”

Juneyt explained that domestic violence negatively impacts a person’s self-esteem and feelings of self-worth, which can lead to a long and difficult journey.

“Abuse can bring up a lot worse things like suicide. I know because when I was a kid I felt worthless because of my father and how he treated me. When you feel worthless, especially in this world, you want to just end it. A lot of kids go through that,” he said.

He said it’s important to consider how children are impacted when they witness and experience abuse, as well as when they hear that abuse is acceptable.

“A child is like a sponge. The way I see some men talk with each other, those talks are toxic to children. Like when they talk about stuff like sexual abuse as something to be proud of in front of their children. This happens a lot in this culture and every culture. When you talk about that in front of a child, what do you think it does?” he questioned. “It makes that child exactly like who you are. That will keep going like a loop until somebody stops it. That is why we need to educate men.”

For Juneyt, becoming more educated about domestic violence was an empowering experience and has encouraged him to take an active role in raising awareness.

“16 calls a day,” he said, reflecting on the amount of domestic violence calls that Waterloo Regional Police receive. “I guarantee that means there is actually tenfold of that because women are too scared to call. That means as we are speaking right now, there is abuse going on out there.”

“If it wasn’t for me being educated and understanding the importance of this, I would not have stepped up.”

“If it wasn’t for me being educated and understanding the importance of this, I would not have stepped up. I would just have been a regular person on the street just turning a blind eye to it. A lot of people do that and it’s not okay. When you see it, you take action towards it,” Juneyt expressed.

He said creating a culture of active participants ready to speak out, removes violence from ever being an option. This forces men who have relied on it in the past to seek out alternatives. He challenges men to think before they act.

“Take the time off and think. Beat that weakness because it is a weakness. Your strength becomes a weakness the minute you use it wrongly. Always think about that,” he said.

Juneyt said he believes a lot of women are unaware of the services available to them and therefore, they feel isolated. He continued to explain that this loneliness can lead to feelings of helplessness and hopelessness.

As a public figure, who regularly performs in front of large audiences, he knows he has a greater reach than the average person. He takes this as an opportunity to vocalize his support for survivors of domestic violence and to inform women of the services that exist to help them, such as those offered by Women’s Crisis Services.

“Whenever I perform, they can see that this is a person I follow and he is supporting my cause. He is supporting what I’m going through. This will show them that they actually are not alone,” he said.

He also knows that messages can carry beyond the initial people we share them with.

“Words spread fast. People that we can’t reach, all of a sudden have hope and help,” he said. “I want to create awareness. I want people to know that they could help some other person. They don’t have to be linked to you as a friend or family member. Take this out of your circles and reach anybody on the street. Give a stranger help and hope.”

Juneyt said it’s important to support those experiencing domestic violence and he explains that there are many ways you can help.

“Just take them out for a coffee, talk to them, understand what they are going through. That could be you someday, man or woman, it does not matter,” he said. “Be their friend. Because then they will have hope that they can get out with that help.”

During lockdown, Women’s Crisis Services of Waterloo Region will remain open to support women and children through our Shelter and Outreach services