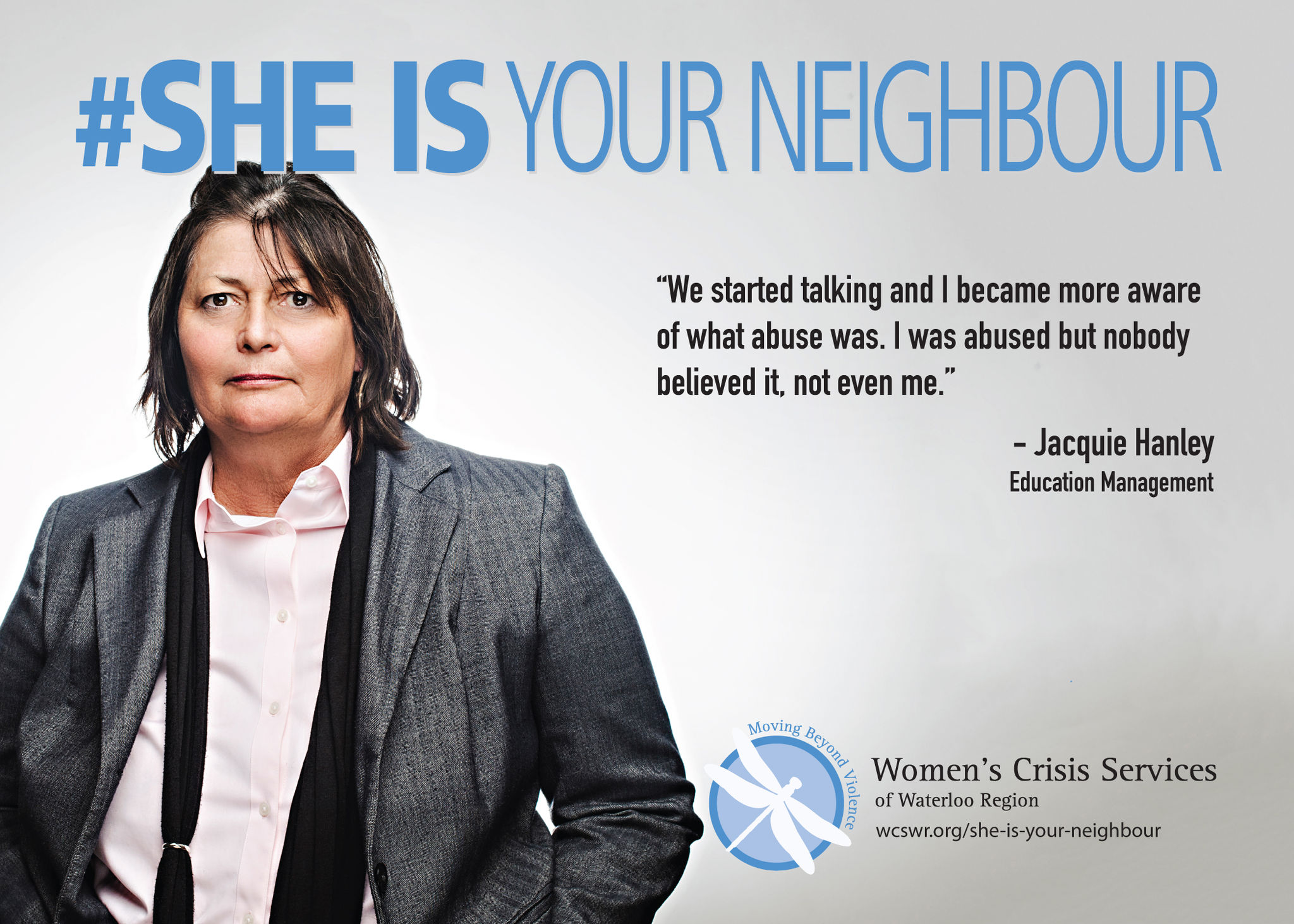 A long time educator, passionate about empowering women through language, Jacquie has always taught and continues to do so. She is often up early in the morning teaching young children in virtual classrooms in China before beginning her day job at the University of Waterloo. In the evening, she teaches refugees and new immigrants to Canada from a variety of countries and all walks of life.  She also runs a series of Employment Webinars for newcomers to Canada.

For years she has worked as a sessional instructor teaching English at the University of Waterloo. In her full time role, she focuses on philanthropy and major gift giving. She supports the Vice President, Advancement and indirectly the President, with overall stewardship and administration in donor management, alumni, and other university and community stakeholders.

Jacquie also finds time to volunteer with Women’s Crisis Services of Waterloo Region. This is her way of giving back to the organization that provided her with support services many years ago.

Experiencing Abuse as an Expat

As she thinks back to their honeymoon on Young Island, she says it was far from what she had imagined. She remembers her new husband ignoring her for most of the trip. She also recalls being pushed down a set of stairs and thrown into a shower.

“I was okay with it because I was told I had to be,”

“I remember my leg bleeding and saying to myself, ‘This is bizarre. I must have fallen myself. He didn’t really push me, that’s not really the case,’” she said.

“I phoned my dad and said I must have made a mistake and I wanted to come home. My dad said to put him on the phone, so I did. In typical fashion of an abuser he said in that cool, smooth tone, ‘Don’t worry, it was nothing.  She just had a bit too much to drink and didn’t eat anything. She’ll be fine. I’ll buy her a couple more days in Young Island, and she’ll be good,’” she explained.

Jacquie said this became the pattern throughout their marriage. Every time she was hurting, she was always given something such as new furniture, a kitchen redesign, or a vacation to Canada or Puerto Vallarta.

“It was always the carrot that was dangling,” she said.

“We lived in Trinidad and Tobago and it was like opulence,” Jacquie explained. “We had everything. We lived in paradise, we had maids, we had gardeners, the typical expat lifestyle.”

Their life which looked wonderful on the outside was far from how it seemed. Throughout their marriage, Jacquie experienced many forms of abuse, although she didn’t realize it at the time. She was made to feel completely worthless and undesirable, all while being kept as a financial hostage. She tried to reach out to friends, but most didn’t understand.

“My best friends would say to me, “what’s wrong with you? You get everything you want, you’re living in paradise – what is your problem?’” said Jacquie.

Her husband began to live somewhat of a double life. He would come home for a short while, she would become pregnant and he would go abroad. He would return just before she had the baby, and soon after would leave again.

“I was okay with it because I was told I had to be,” Jacquie said. “I had to be the supportive, loving wife at home, creating a strong foundation for my family and my children, loving my husband and doing the best I could. Never letting on to the children that there were any issues.”

After many difficult years with her ex-husband, Jacquie separated, which was the toughest thing she faced.

“I was not only rejected by my husband, but now also by the host country,” she recalled.

No longer having status in Trinidad, she and the kids were deported and returned to Canada.

“I felt I was living a Cinderella story in reverse. I had the riches, and went to rags of sorts, living on assistance because I had nothing,” she said.

“They don’t see a hurting person. There are deeper hurts beneath the veneer of everything. It’s not about the clothes, the attire, the position,”

In the beginning, Jacquie was receiving support from her ex, but eventually this stopped.

“When you live as an expat you don’t necessarily amass assets so your only asset really is the income that you earn, which was significant, but he didn’t want to share it,” she said. “Here I am thinking this man is going to support us but he didn’t want to. He wanted to keep the money for himself and I had to be okay with that because there was no reciprocal enforcement orders between Canada and Trinidad and Tobago.”

Back in Canada, Jacquie was not sure what she was going to do with her life after living abroad. At this time, she sought support from Women’s Crisis Services of Waterloo Region.

“When I think of why I came to Women’s Crisis Services, it’s because I didn’t know what to do. I didn’t know I was abused when I came there,” she said.

Jacquie was set up with a support worker who helped her access many community services, while also helping her come to terms with her situation.

“We started talking and I became more aware of what abuse was. I was abused but nobody believed it, not even me,” she said.  “I did the workshops on abuse, and the cycles of abuse and I saw myself.  I just broke down. I was in a business suit.  The women beside me weren’t in suits. I thought, “You don’t fit this profile? You don’t fit here! You lived the high life! Anyone’s dream life! You weren’t abused? What part of you was ever abused?”

She struggled with accepting what had happened to her because she really didn’t feel like she suited the stereotype of an abused woman.

“If someone was sitting across from me at a table they may think, “Abused? No way!” Society looks at women that way. They don’t see a hurting person. There are deeper hurts beneath the veneer of everything. It’s not about the clothes, the attire, the position,” she said.

She continued meeting with her support worker and together they developed a plan for Jacquie to continue pursuing a degree, which she had began in Trinidad through the University of New Brunswick.

“I decided that education was where I would find my greatest strength and my greatest love and that’s where I ended up. I pursued it,” she explained. “I was very strategic in finding the employer for my lifetime. I decided that I would apply to the University of Waterloo, an organization that would eventually help me co-parent my children, by housing them, schooling them, and helping to put food on the table. I am forever loyal as a result.”

“I think it’s really important for women to have a map of what’s next,” said Jacquie. “It’s also important to educate women on the resources and community supports that are available. They don’t know you can access a student loan to go back to school and do a degree online like I did. I did two. I have a Masters degree, I’m convocating in June,” she noted.

That being said, it’s not just about the community offering this information, Jacquie said.

“I think women also need to feel inspired enough and motivated enough beyond the walls of abuse to even want to make their situation different,”

“I think women also need to feel inspired enough and motivated enough beyond the walls of abuse to even want to make their situation different,” she said.

She understands that this is easier said than done. To this day, Jacquie has never received the full child support she was owed.

“You have this circle and when you look at it, it never ends. Long after the abuse is ‘over’ it continues. It doesn’t stop, it doesn’t. I’m living proof of it and I’m living it every day,” she said. “I know I am 15 years behind my peers in all aspects of my life, because of what I have been through. I will have to work until I’m 80, but that’s okay. I’ve accepted these things.”

For Jacquie, helping empower others is what drives her to persevere. During the most difficult times of her life, there were certain individuals and organizations who provided her with help.

On an individual level, she explains her parents provided her with a place to stay when she and her children needed it. She is also grateful to an anonymous woman who bought pyjamas for her children at Christmas every year, who they referred to as “their angel.”

KW Children’s Drama Workshop helped her daughter and her niece by offering a scholarship to participate in several plays, all of which helped raise the girls confidence and self esteem. On another occasion, as part of Friends of Hockey, she and her son helped to raise more than $25,000 in arena upgrades for their local community arena. As a result, the they put her son through hockey for all the years he played for the community, paying for his equipment and fees every year.

Jacquie says being a ‘good neighbour’ is important because you never really know what someone is going through.

“How many more people are like me and don’t talk about it? They don’t want to ruffle any feathers, or raise awareness in their own community because, god forbid, somebody might look at me different.” she said.

“I am your neighbour!  Look at me! I am still standing!  I am resilient! In spite of what you see or think. I was mistreated, I was hurt, I was rejected, I was left to my own devices, abused by one system after another. I was mother and father to three children, I was considered to be a nothing, always feeling so alone to fight the next challenge.  But I am not the island.  I am part of a community.  I am your neighbour.”

“I’m happy to share because I’ve come out the other side in so many ways. But, it hasn’t been without struggle.”

Jacquie says although telling her story is difficult, she felt it was something that she needed to do.

“When I saw #SheIsYourNeighbour, I thought I had to do my part,” Jacquie explained. “I’m happy to share because I’ve come out the other side in so many ways. But, it hasn’t been without struggle.”

“We just don’t know what women go through or experience because everything has to look so good and be packaged well on the outside. We have to be everything for our kids if our husbands abandon us, like mine did. We have to recreate our lives, re-engineer everything. Sometimes, we have to start right from scratch, and we don’t even have the benefit of a community,” she said.

This is something that we can change. Jacquie suggests taking a minute to learn about the women in your community and consider what you might be able to do to lend a hand. This could be shovelling someone’s driveway, cutting their grass, or offering to take their kids to a hockey game.

“It’s a matter of reaching out and saying, ‘hello’ to your neighbour. Finding out about your neighbour. We live behind our closed huts and screens and don’t even bother anymore.” she said. “We need to work together in this. Somehow, we can fix this, we can.”

About the Project
Donate Today
Neighbour Tips
Skip to content