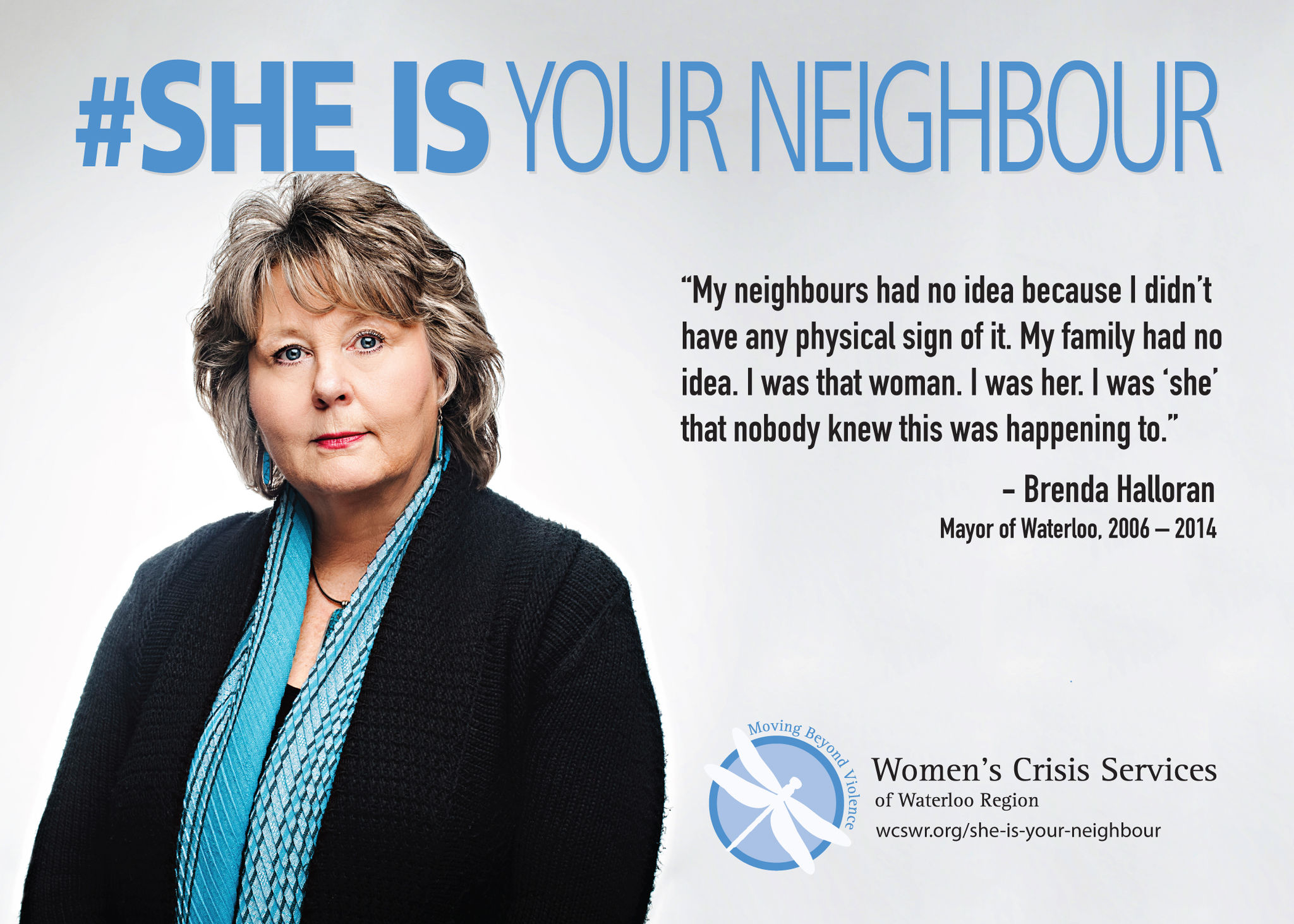 We had the pleasure of sitting down with Brenda Halloran, probably best known for her eight-year reign as the mayor of Waterloo.

A leader in the community, Brenda is currently active on many boards including Supportive Housing of Waterloo, the Sexual Assault Support Centre of Waterloo Region, oneROOF Youth Services, Focus for Ethnic Women, Startup Canada, and GroYourBiz. Not to mention, she runs a personal consulting business, coaches, emcees events, is regularly recruited as a keynote speaker, and is the proud grandmother of two.

Brenda is also a survivor of domestic violence.

“It happens at all levels of society. I’m telling you, I know women who were very well off and it happened to them. We have to get rid of that stereotype,” she said.

“It happens at all levels of society. I’m telling you, I know women who were very well off and it happened to them. We have to get rid of that stereotype,”

“My neighbours had no idea because I didn’t have any physical sign of it. My family had no idea. I was that woman. I was her. I was ‘she’ that nobody knew this was happening to.  No one would dream it because I presented so fine to the world,” Brenda said.

For Brenda, what started out as a fun and exciting relationship, gradually became something else.

There were consistent and growing concerns around finances – paychecks would be “lost”, people would call their house demanding the money he supposedly owed them, he started stealing from her purse, and he once even drained her bank account.

At this point, they were married with a young daughter. Feeling stuck, she didn’t know how to handle the situation.

“There was always something wriggling in the back of my brain that this isn’t right, this isn’t normal. But I was always too proud to tell anybody,” Brenda explained. “It was a gradual escalation of his unstableness, his anger, his toxicity, and verbal abuse…. At the time I didn’t realize what was going on but it was really psychological. I wasn’t prepared for it, I had no experience in this type of relationship.”

Not able to hold a steady job, her husband started coming home intoxicated late at night, or not coming home at all.

“This was constant financial and psychological abuse because I never knew if we had enough money to pay the mortgage. I didn’t know if we had enough money to buy food… I had no idea what to do and I was ashamed to have to tell my family and friends, so I hid it from everybody until he started not coming home on weekends,” she said. “When I would confront him, he was verbally abusive and starting ransacking the house.”

One morning her husband began yelling and swearing at her after she denied his request for more money. She had no more money to give. Their two-and-a-half year old daughter was present at the time. Frightened, her daughter asked why Daddy was yelling.

“That is when I looked at her and thought, what am I doing? I have to deal with this,” Brenda explained.

When she confronted him about his behaviour, things escalated and he demanded that she get out or he would come after her.

She called her parents and explained everything to them, to which she received a chilling, “Thank God, honey, we have so much to tell you,” from her mother. This was a sentiment many of her friends and loved ones shared once she began to open up to them about the situation. Her loved ones revealed that her ex-husband had been asking them for money behind her back for years.

“In a way I knew it wasn’t right but I was too afraid to leave and I felt ashamed. I think it was the shame of having to admit I’m scared,” said Brenda. “On the outside people thought everything was okay but my family knew something wasn’t right.”

The next weekend when he returned from another weekend disappearance, her family was there to support her. After kicking him out, she changed the locks and left all his belongings on the front porch. Especially heartbreaking was realizing that it wasn’t her or their daughter that he seemed most troubled about losing, but instead, a set of golf clubs.

“I was taking my control back,” said Brenda.

“Taking control of my life with the help available and the services in this community.”

Process of Rebuilding and Giving Back

Ending the relationship did not immediately fix all Brenda’s problems. Weighed down by a mortgage that she could not manage on her own, and receiving no child support, she made the difficult decision to sell her home at a loss and move in with her parents.

Despite these hardships, she was overwhelmed with the support she was receiving.

“I was taking my control back,” said Brenda. “Taking control of my life with the help available and the services in this community. Getting back on track was another impactful event that was very very difficult but it sets you on the path of what you decide to do with your life and where you are going to take it.”

“Once you have gone through something as traumatic as marital abuse or domestic violence – there are all different levels – you have become a person of strength and determination. You didn’t settle to stay there, you made the change. If you made that change and got your life back and your joy back, you can do anything,” she said.

Brenda decided to become a volunteer with the Child and Youth Program at Anselma House. She had experience working with children through her role as a registered nurse and training in family and child therapy.

Coming home from the first volunteer training session was especially emotional for her.

“I think I cried for about four hours because I realized I was in an abusive marriage – I had just never named it. I didn’t know it was abusive. That was something I can still really remember. I thought, well, I’m strong this shouldn’t have happened to me, and it did,” she said.

In the years following, Brenda continued to give back to the community in various ways.

“Everything kind of happened at once to help me in my most desperate time. So I feel that it is my obligation to help back and to give back continually, to forever give back to anybody, especially women in tough positions.”

In 2006, Brenda went on to become the mayor of Waterloo, a position she held for eight years. She hopes that speaking about her journey will inspire other women who are experiencing domestic violence.

“You can be in a bad situation where you feel hopeless and still attain the dream you had set forward for yourself. When I was in that situation, I had no idea I was one day going to be in politics and become the mayor. I had no idea,” she said.

For Brenda, the #SheIsYourNeighbour project is about sparking conversation and action.

“It’s almost like unlocking a door for the community to have difficult discussions or just pay more attention to each other,” she said. “We have to be caretakers of each other.”

She explained that a good caretaker is an open listener who suspends judgement and instead aims to understand. She said being honest and asking open-ended questions like “Can you tell me more?” and  “What can I do?” is key.

“In my world I do have people coming to me with some significant issues because they don’t know where to go or what to do. I try to direct them the best I can,” she said. “To me, that is one of the most incredible honours – that somebody in a really tough time trusts me to help them.”