Waterloo Region, ON- Women’s Crisis Services of Waterloo Region is very proud to thank the following locations of Shoppers Drug Mart in CAMBRIDGE for their support of the campaign to Rebuild Haven House, the shelter supporting abused women and their children in Cambridge and North Dumfries. 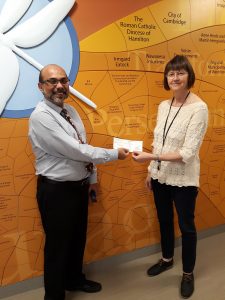 Together they donated $21, 643 to Rebuild Haven House.

Their longstanding relationship of support reaches back over a decade and their dedication to women and children is outstanding.

The fundraising campaigns are employee driven and include activities like asking customers for a donation at the cash register, bbq’s and auctions. This hard work was done during their fall campaign and was supported through the energy and dedication of Shoppers Drug Mart staff and owners. To honour their investment, Shoppers Drug Mart, Cambridge is listed on our public donor wall in the main lobby of the rebuilt Haven House.