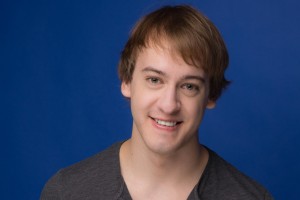 Thanks to our playwright Dwight Storring, joining our talented cast of Rage Against Violence is Zach Parsons.

Zach is an alumni of the Theatre program at the University of Waterloo and just recently became more aware of the programs and resources offered by Women’s Crisis Services of Waterloo. He is inspired to be a part of doing ONE ACT by becoming more aware, learning the signs of abuse, the behaviours, and being alert. He believes that ONE ACT can be sparking up a conversation between peers to inform dialogue so that perhaps more people will step up and step in.

Zach’s stage experience is vast and includes such roles as Bottom in A Midsummer Night’s Dream, Antipholus of Syracuse in The Comedy of Errors, and Roget in An Experiment with an Air Pump.

Along with many lead roles, he was awarded the Lloy Coutts Book Prize for Excellence in Acting in his third year.

Elsewhere, his recent local credits include Charlie/Charles in the world premiere of On the Inside (Lost&Found Theatre) and lead roles in a few independent feature films with Fable Forest Pictures, shot in and around KW.

Outside of KW, he was recently in the Toronto Fringe show Cut-Throat: The Isolation of Ambition (PACE Theatre), and the devised theatre piece The Second Life (Tottering Biped Theatre), which was a part of the Impact15 theatre festival, and had two runs of performances in Hamilton and Burlington.

When asked about his experience as part of the cast so far, Zach said:  “It really hit home for me, because to be honest, I’ve never dealt with anything like this before (violence or abuse), and it was hard for me to really connect to the stories…it really put things into perspective. I had no idea that all of this was happening under the surface. So this really gave me the drive to get on board with the project and make sure it’s done well. I only hope I do his story justice.”

Zach is a part of our talented cast during ONE ACT as a reader in the Rage Against Violence play.  To purchase tickets to this event, contact Drayton Entertainment 1-855-372-9866.