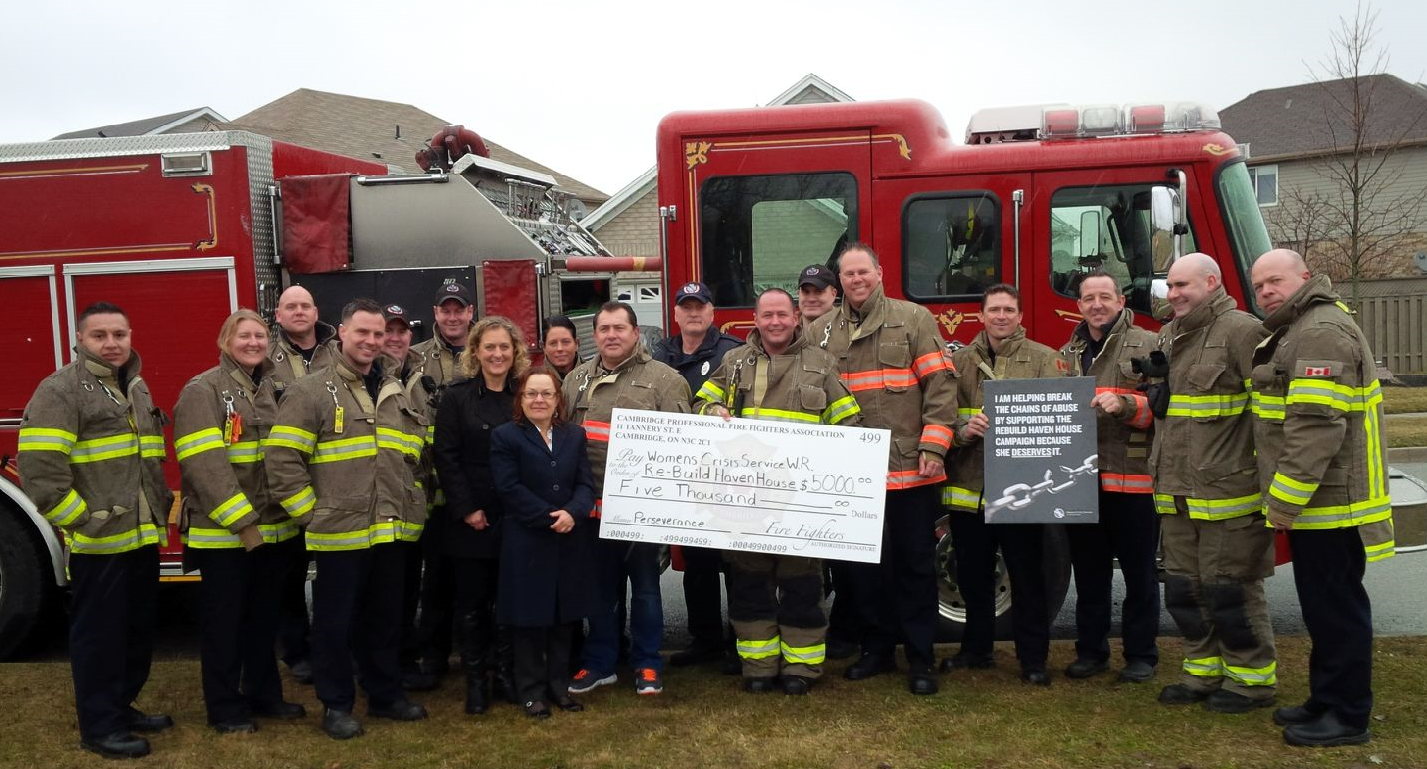 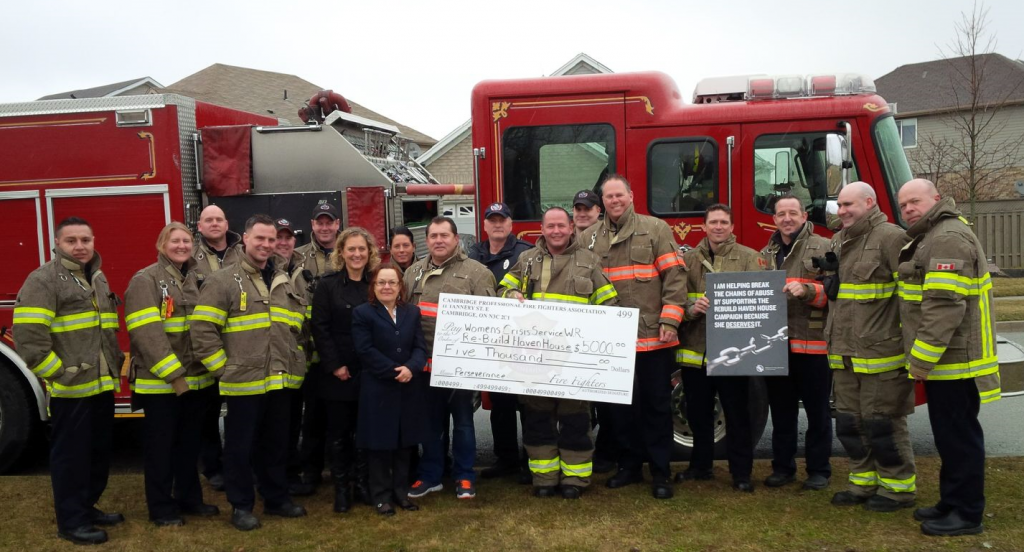 Because women and their children deserve it!

Cambridge, ON “ 130 members of the Cambridge Professional Fire Fighters Association (CPFFA) place their support behind Women’s Crisis Services Waterloo Region (WCSWR) to rebuild Haven House here in Cambridge. The women and children transitioning from a life of abuse deserve to have the support and resources that this shelter and its programs offer.

Our members believe that everyone in our community deserves to feel safe. said Chris Davidson, President of the Cambridge Professional Fire Fighters Association. When fleeing an abusive situation, many women and their children have very few safe places to turn. Haven House here in Cambridge is a safe place for them to go and has been serving those seeking a safe haven for many years.

The members of CPFFA Local 499 committed to the donor level of Perseverance ($5,000 – $9,999) in the rebuilding of Haven House fundraising campaign. There is significance with this level of support from the Cambridge Fire Fighters. 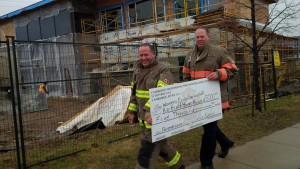 Fire fighters are easily identifiable servants to the community. We are generally recognized by our iconic emblem historically steeped in tradition, the Maltese cross which has 8 points of virtue. One of these points signifies the virtue of Perseverance. offered Davidson. Our members respond 24hrs a day 7 days a week, and never give in, even when the going gets tough.  People depend on us to be there whatever the nature of their problem, emergency, or need. The staff and residents at Haven House share this virtue of Perseverance with the fire fighters that proudly serve the community of Cambridge.

Mary Zilney, CEO of Women’s Crisis Services of Waterloo Region says The support and generosity of the Cambridge Professional Fire Fighters Association will help us inch closer to reaching our fundraising shortfall of $2.5 Million. The members of CPFFA Local 499 continue to be strong supporters of the work we do here in Cambridge, whether it’s responding to emergency calls for assistance, by providing food and gifts at Christmas time to women and their children staying in the shelter, and now by committing to the She Deserves It campaign to signify Perseverance. Their contributions to our agency and our clients are sincerely appreciated.   We are very proud to have them as partners in this important community project. 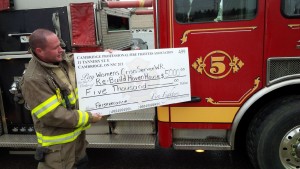 When you grow up in a cycle of abuse, you need a safe place to go with the resources to help you break the cycle. commented John Holman, CPFFA Secretary. Many families are affected by spousal abuse or even child abuse. When people in these situations realize it’s time for change they need to be able to turn the page in their lives and start new. The programs and facility offered through Haven House here in Cambridge will help these families make a new chapter in their lives.

Women’s Crisis Services of Waterloo Region serves abused women and their children. With 45% of the residents being children; and 80% of these children being under the age of 10, the goal is that together we can all help break the intergenerational cycle of abuse and inspire children and their moms to Move Beyond Violence.

Our CPFFA Local 499 members would like to encourage other unions and groups to contribute in whatever way they can in the final portion of the fundraising campaign to help WCSWR rebuild Haven House. We need to give the women and their children fleeing a cycle of abuse the opportunity to move on, because they deserve that opportunity. offers CPFFA President Chris Davidson.

In 1936 the IAFF Local 499 was established in Galt. When the towns of Galt, Preston and Hespeler amalgamated in 1973 to the City of Cambridge, the CPFFA was formed.  130 dedicated and committed members proudly serve this community 24hrs a day 7 days a week for all hazards response.  Our Association is honoured to serve, protect and assist our community in many different capacities.

From the obligations of the fire service, to our benevolent fund donations in excess of $100,000 to support individuals and community groups here in Cambridge, collecting and donating over $500,000 through our annual Muscular Dystrophy Boot toll since 1969, our Cambridge Fire Fighters Basket Fund helping over 500 families annually in need of food and gifts at Christmas since 1921 Cambridge Fire Fighters are trusted and valued members in OUR Community.

John Holman at 519-240-7667 or secretaryholman@cambridgefirefighters.com