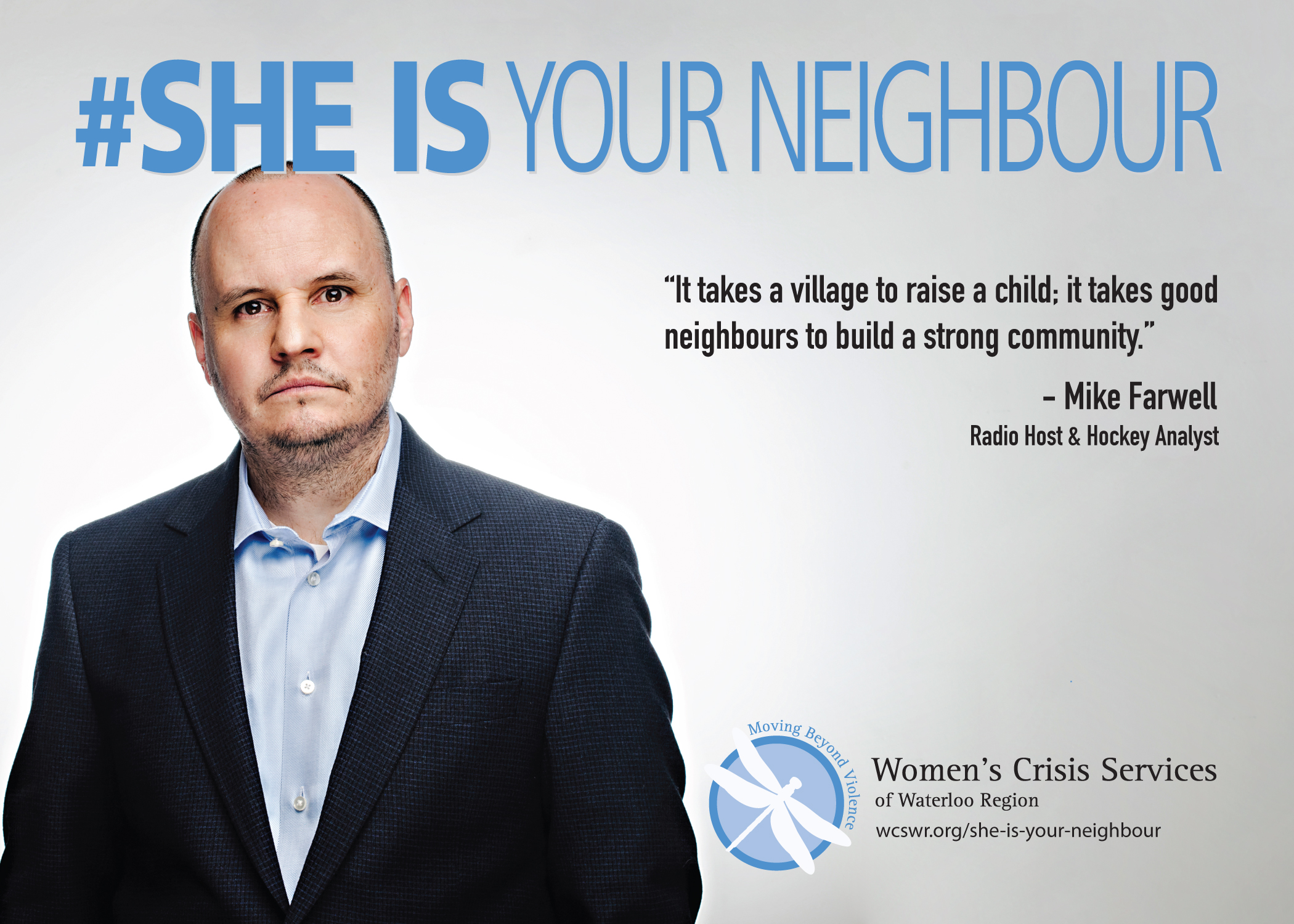 Self-proclaimed ‘born and raised Kitchener kid,’ Mike Farwell has more than 20 years of radio and television broadcasting experience. Currently, he works with Rogers Radio in Kitchener as the host of the ‘The Mike Farwell Show’ and the play-by-play voice of the Kitchener Rangers on 570 News. He is also a columnist for the Kitchener Post.

For many years, Mike has been heavily involved in the community. Four years ago, he was motivated to join the Board of Directors at Women’s Crisis Services of Waterloo Region. At the time he joined, a big focus was on a capital campaign to pay for the construction of Haven House in Cambridge.

“I would say that’s been the main focus of my four years on the board, making sure that we stayed on track with Haven House,” he said. “Making sure the funding stayed on track, getting messaging into the community about what Haven House was all about, and working with the board on those other governance issues around getting us settled and started in the new area in Cambridge.”

There was one event in particular that helped Mike make the leap to join the organization’s board. “I got motivated to get involved with Women’s Crisis Services, specifically, around the controversy that erupted when Bill Cosby was coming to the Center in the Square. It heightened my awareness of issues relating to consent and sexual assault,” he said.

When Bill Cosby came to town, Mike was part of a group that organized a counter-event called ‘Voices Carry’ which raised funds for both the Sexual Assault Support Centre and Women’s Crisis Services. Rather than holding a protest, the event was meant to present a positive alternative option to the Bill Cosby show.

“We organized a concert and speaking event. We invited the community to come to our event as opposed to going to see Bill Cosby at The Center in the Square. Anybody that brought a Bill Cosby ticket could come into our event for free,” Mike shared.

“I’ll never forget what she said to me, ‘Talk to the women in your life and don’t ask if something happened, ask them what happened, because statistics tell us something did.’ It was a real eye opener for me,”

“We got a bunch of stuff donated, we had a silent auction, we had great, powerful stories from great, powerful women like Brenda Halloran shared that night, and we had a little bit of music. I think we had a pretty uplifting night,” he said.

With upwards of 200 people attending the event and nearly $12,000 raised, Mike said he was very proud of the way a small group of people came together to execute the event and the way the community responded to it.

“We just said listen, let’s try to use this controversy as a way of motivating people to think about things differently,” he explained.

Mike thinks that we should all keep ourselves open to experiences that change our perspectives and enhance our understanding of issues such as domestic violence. His years on the board did this for him.

“It’s not lost on me what happens within the walls of this shelter. I’m in and out of both of these buildings, Anselma House and Haven House, many times through my work as a trustee with the board and it doesn’t escape me that these buildings are used for far more serious purposes than our governance meetings,” he said.

He shared the mixed emotions he felt after the initial tour he received of Anselma House. “It really helped me understand what’s being accomplished with the construction of these two shelters and what it means to the families that need them.”

“On the one hand, you’re thinking, ‘Oh my gosh.’ We didn’t meet any mothers and children, but you realized that you’re in the room where there’s a TV set and toys and things like that, so you can imagine children playing and mothers gathered around. It’s hard because you know that they had to be here,” Mike said.

“But on the other hand, you’re looking at it going, ‘Well, I’m glad that we have this.’ It made me even happier and prouder for this community and for what was done under Mary’s guidance prior, and Jen’s guidance today, to keep these shelters as going concerns in this community and to have a place to come that’s not depressing,” he said.

Mike knows that learning about the realities of domestic violence is not an easy or pleasant process. He shared, “When I learned how prevalent it was and the numbers that we were talking about, it was really disheartening for me.”

Despite this, he knows the knowledge he has gained has provided him with the tools to help. There was a time when a friend approached him seeking advice for another friend. “It was a really unfortunate situation where the husband in the relationship became an alcoholic and was physically, emotionally and financially abusive. This woman was just left in tatters,” he said.

“I think it’s important for all of us just to be caring. I think that if we’re aware enough of our surroundings and the people that we are close to, then we can recognize when something is amiss.

He expressed that it was through his community connections and what he had learned through his role on the board that he was able to answer questions like, “where she would need to go to find support, what kinds of things she could do, what would happen with schools, what happens if you go to the police, and is there support financially or otherwise available?”

Mike said, “I remember as this was going on, they had some support through agencies like Women’s Crisis Services. She didn’t come to the shelter but she was given the support that she needed to get out of a really bad situation.” Fortunately, this woman had a strong network of friends and family that helped ensure she had an apartment and other supports in place for when she was ready to leave the relationship.

Through this experience, Mike began to better understand how domestic violence is a journey. He acknowledged that even if someone asks you for guidance, you still need to let that person make the decisions for themselves, even if that means the person returns to the relationship.

“I’m not that person. So I can’t presume that I would do it this way. When you’re not in it, you have no idea. You have no idea what feelings they have, what emotions they’re going through,” he explained. Therefore, he recommends using a supportive and non-judgemental approach if someone comes to you seeking advice on a personal situation involving domestic violence.

Mike said, “I think it’s important for all of us just to be caring. I think that if we’re aware enough of our surroundings and the people that we are close to, then we can recognize when something is amiss. And we make sure that we’re there to say things like, ‘I support you,’ or ‘Is there something that I can help with?’ I think it’s critical. I think it’s critical for the well-being of our community.”

To Mike, being a good neighbour involves educating yourself about domestic violence and trying to better understand the struggles that women who experience it go through.

“It goes right down to the little things of noticing a change in your neighbour’s patterns with lights and cars, to know if they’ve gone away or if there’s something wrong at the house. It takes a village to raise a child; it takes good neighbours to build a strong community,” Mike said.

He wants to remind people to carry this attentiveness to all members of the community because no one is immune to experiencing difficult times, including public figures and community leaders.

He said, “I think of Bryan Larkin a lot because he’s a leader that I’ve learned a whole lot from in my lifetime. You see him and think, ‘Of course, the Chief of Police has it together.’ I think you forget sometimes that he has normal things in his life that happen to him. Maybe he gets in a car accident. When a leader like Bryan would talk about that, it brings it home for people that may be experiencing it or may recognize this is happening in their community without consciously thinking about it a lot.”

Mike continued, “I think it’s important for people to know that we experience real things in our lives, just like they might.” He said this is why it’s important that community leaders support domestic violence awareness and prevention.

“Let’s remove the stigma. Let’s try to normalize the conversation a little bit. I can only imagine, but if you’re the one that’s in it and your world is crumbling around you, you must be thinking that you’re the only person going through this. To hear that you’re not, and not only that, but there are support systems within your community and within your neighborhood to get some help, then I think that’s a great message to get across.”

No matter how difficult they may be, Mike emphasized that discussions surrounding domestic violence need to continue taking place. He said, “We need to talk openly about this issue in our community because sadly, it’s just so prevalent. So it really means a lot to me to be involved with facilitating that conversation in whatever form it takes. And I don’t think we can prejudge what form it should take.”

He recalled something Brenda Halloran had said at the ‘Voices Carry’ event, in reference to the statistics that one in three women have experienced abuse.

“I’ll never forget what she said to me, ‘Talk to the women in your life and don’t ask if something happened, ask them what happened, because statistics tell us something did.’ It was a real eye opener for me,” Mike said.

He shared, “I’m a big fan of this community. I think we’ve got so many things around here that are going so well. I talked about these two shelters already, Anselma House and Haven House, they’re a real testament to what we can do as a community. But we have to remember what they’re for. We aren’t done yet”

Coming from an industry where repetition is key, Mike said, “We have commercials that run 100 times so that you can reach enough ears. I would say the same as this is concerned. I don’t think you can talk about it often enough. ”

He said once the people leading these conversations are starting to be exhausted by it, then just maybe the message will finally be permeating into other areas of our community.

“To be able to have these conversations around this really important issue, it matters. It matters to our community, and it matters to me,” Mike said.