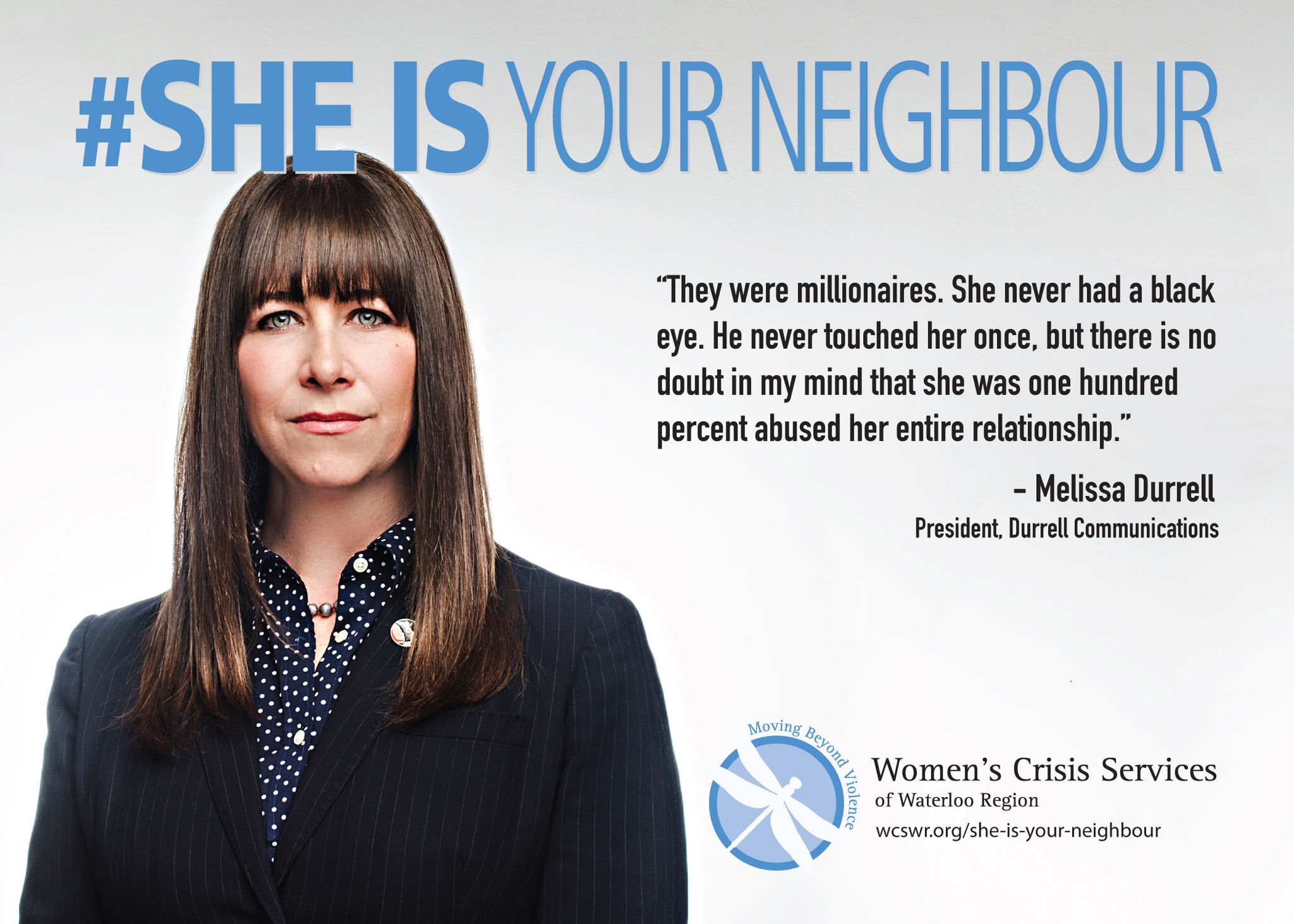 Coming from a career as an award-winning broadcast journalist, Melissa Durrell continues to use her passion for communication and her unique storytelling skills to help strengthen her community.

President of Durrell Communications, Vice Chair of the Uptown Business Improvement Area (BIA), Director of Media and Public Relations for Women’s March Global, board member of REEP Green Solutions, and member of the Waterloo Park Committee, Melissa is particularly focused on helping elevate women within their respective fields, celebrating the success of fellow leaders, and helping others find their voice.

She helps facilitate this in several ways. One way is hosting Women’s March Canada’s weekly podcast which offers Canadian women a platform to share how they are making a difference in their community.

“Amazing women who are doing incredible things in our country deserve to be heard. They have great stories to tell,” said Melissa.

With this in mind, Melissa helped launch the Zonta Film Festival eight years ago, showcasing inspiring, powerful, and thought-provoking films by women filmmakers. With diverse subject matters ranging from sexual assault and domestic violence to athletes to Indigenous rights, the common thread between the films is that they are all stories told through a female lens.

Proceeds from the festival go to local charities and non-profit organizations such as Women’s Crisis Services of Waterloo Region.

“It’s important that the money we raise stays locally. We are bringing in films talking about the issues affecting women worldwide, but it’s really important for people to know what they can do locally,” Melissa said

If you have one minute you can donate to a local women’s organization, if you have 10 minutes you can write a letter to an MP, she suggested.

“It was a neighbour growing up in Saskatoon or it was stories of people that I was covering when I was a journalist,” Melissa explained. “Throughout my life I have seen the effects that it has not only on the women, but on their family members, on their work-life, and on their community life.”

“I think the most important thing we can do is listen and support the women in our lives that are going through this,”

Melissa has known family members, close friends, and even colleagues who have struggled. One of her closest friends married a very wealthy man who was emotionally and financially abusive.

“He never hit her but she couldn’t spend a penny without him,” she said. “If we’d go for coffee she would have to bring receipts home and sign it with my name on it, he wasn’t just tracking money; he was tracking her.”

The situation worsened when her friend moved away with her husband, isolating her from her friends and family. “Her health broke down, of course, which is the next sign. She had so much emotional abuse that her body was reacting,” Melissa said. “She ended up having a full breakdown.”

“They were millionaires. She never had a black eye. He never touched her once, but there is no doubt in my mind that she was one hundred percent abused her entire relationship,” she said.

Melissa emphasized how essential it is for people to understand the many aspects of domestic violence and the different ways it can occur.

“Once you know them, you either know that you are experiencing it, or that someone close to you is, then you have the tools to make better informed decisions,” she said. “Physical abuse is the one that we see but all the other aspects are also breaking women down. To me, that’s the tragedy of it all because not everyone is going to be walking around with the physical signs that you can spot.”

“I think the most important thing we can do is listen and support the women in our lives that are going through this,” said Melissa.

Addressing Violence in Our Community

Thinking of her own community, she expressed how unhappy she felt about the statistics published within the Canadian Centre for Policy Alternatives report, which ranked Waterloo Region as the least safe place for women to live out of Canada’s largest 26 metropolitan areas.

“I think that’s one of the big problems we have right now, that we are not actually admitting what a massive problem we have,” she said. “People just need to open their eyes and acknowledge that it’s happening and then we can start to move forward.”

“We need to use our voices to speak out for people who may be afraid to speak out, or who can’t speak out.”

“We see people wearing their specific hats. In my case, I was a reporter on CTV, I was the politician in Uptown Waterloo, Mom or wife, or I am the president of a company. You know, we play these public roles and that’s what we’re expected to be. But we all have our own personal stories to tell,” Melissa said. “Community isn’t about being put in one role, we all have so many different sides.”

These sides extend beyond our work lives into our personal and family lives.

“I have a daughter, she is 12 years old. Everything I do, when I put my mother hat on, is trying to give her the right tools so she can be a strong confident woman, but sadly, no matter what I do, the statistics are not in her favour,” said Melissa.

This is why it’s critical that we do something to make a change. Melissa believes that community leaders have a unique role to play.

“We need to use our voices to speak out for people who may be afraid to speak out, or who can’t speak out. That’s part of the job of being a leader,” she said. “It’s about community. We need to bring it back to that space. It’s about protecting our friends, our family, and our coworkers. It’s about being good listeners. It’s about admiring the survivors who have the
courage to come out and talk about it.”

“If we are actually going to make  an impact and change what is happening, we need to think of everyone as our neighbour, someone that you can actually help.”

It’s also about recognizing and respecting a woman’s journey, she says.

“It’s not a quick fix. It is years of therapy. It’s breaking up families in some situations. There is so much more involved. I think that if you truly want to be respectful to your neighbour and people going through this, listen to their story. Their story is not problem-solution; it doesn’t fall into those easy elements. It’s a long road that often involves culture, tradition, families, neighbourhoods, friends, schooling, all sorts of different dimensions,” she said.

When it comes down to it, we all have a part to play in improving our society.

“Whether it is your neighbour, if it’s a co-worker, if it’s the person that you workout with, whomever it is, take that first step to start to talk about it,” Melissa said.

If someone does open up to you, she says the role of the neighbour is not to judge. “Just listen and be open to it. That will get them on the path, hopefully, to survival,” she said.

Melissa understands that this is a hard issue to talk about, but she sees the strength that comes with taking a moment to show your support.

“I see the power of us all banding together. It doesn’t matter where you live, what you make, what your education is, but that we are all neighbours. If we are actually going to make an impact and change what is happening, we need to think of everyone as our neighbour, someone that you can actually help,” she said.