Everyone has a story, some good some bad. I think the most important thing about your story is what you learn from it.

Here is my story.

I am 53 years old and originally from California. I have been married to my amazing husband for seventeen years and we have a wonderful son who just entered his teen years. He is the only blood relation I know in this world.

A Journey with Domestic Violence

I was born one of thirteen siblings all who were given up for adoption. My biological mother had me when she was forty-two and as far as I know, I was her last child. My mother’s lifestyle as a sex worker put me at risk for sexual abuse at a young age. If you think a child does not remember things from their childhood when they are adults, don’t kid yourself. I remember it like it was yesterday. I moved often between foster homes and orphanages, until my mother lost custody of me for good. At eight years old, I was placed in foster home where the sexual abuse continued.

I was finally free from abuse two years later when, at age ten, my adopted family was awarded custody. What I didn’t realize then is how my past abusive experiences would affect my future relationships. I thought my life was free from the pain of my childhood, but once you’re abused, or at least for me, it became the only type of attention I really grew to know.

I met my first boyfriend at eighteen. I was naive and so desperately wanted someone to love me, all of me, no matter the consequences. The first time he hit me was after I spoke with a boy I went to college with while at the grocery store. When we got home I was thrown up against a wall, punched and called names. He said I was flirting with the guy, and had a “thing” for him. I remember he took a can of deodorant out of the grocery bag and started slamming his head yelling “look what you’re  making me do”. I felt so bad and ashamed that I was causing him to self inflict pain. I am going to repeat that, I felt ashamed that I hurt him. I felt it was my fault that he was so angry and I remember hugging his ankles begging him to forgive me. He did and promised he would never strike or shove me again. I believed him. There were little arguments that we had where he upset me but not to the point that I would say it was abuse. Perhaps I neglected to recognize the signs.

The next big fight we had happened when we were headed to a birthday party. I had a white summer dress on and he thought it was too sexy. He shoved me to the floor and physically assaulted me by dropping a bowling ball on my back, breaking my back. All I can remember is the dreadful pain that I was in and that I could not move. He begged me not to tell anyone what really happened. He said that it was an accident, that he was so very sorry and that he promised he would never do it again. In the hospital, I remembered his words and again I felt so horrible that I chose a dress that made him so angry. What was I thinking! He said all sort of things that made me feel that I had provoked him and I felt his actions were all my fault.

The final straw that finally motivated me to run was when he broke my nose. After it happened, he fled my apartment and I picked up the phone to call for help. This was the breaking point when I decided to leave the relationship. Throughout the five years we were together, I had pushed away anyone who wanted to help because he secluded me. He was so good at manipulating me that I didn’t know what love was truly supposed to feel like. I thought I was deserving of his abuse. I did not know any better. I did not know there was better.

One thing I have learned through all of this is, if you have a friend in a similar situation, in pain, and hurt, you may wonder why they don’t just leave. You need to realize that it’s not that easy. There are many reasons why women don’t leave. They may have had a childhood like mine and could be craving attention. Even bad attention, because it’s all they know. It’s all I knew! I was weak and my abuser had such a strong hold on me. I am here today to say, we can get strong. With the right support, with God and a strong supporter, like my mom, I got through it.

Like many abusive partners, my boyfriend tracked me down years later after I had moved to a different city. My mom had an encounter with him while she was staying at my apartment and he climbed in the kitchen window. I don’t know how that conversation went. But whatever she said, I never saw him again.

My Life as a Survivor

To be a woman who was in an abusive relationship for five years is not something I am proud of. What I am proud of is that I am a woman who survived, got out and never looked back. I made the choice to help myself and help others. I am free of the pain and control I was under for so many years. Today I am an example of someone who was severely abused but found the strength to love myself and create a life that I had always dreamed of. We are all survivors and it is possible.

I once heard someone use the phrase “Beauty from Ashes” I feel that I became a beauty from ashes. I AM A SURVIVOR. I am so proud of who I have become and though the journey was hard, I feel that I am a very strong woman because of it. I have an amazing man who loves me with his entire heart, I have an amazing son who is my entire world, I own my own company and I now make it my mission to help other women who are going through the things I have. I hope that by sharing my experience I am able to make a difference in many woman’s lives. I want to help others create beauty from ashes. 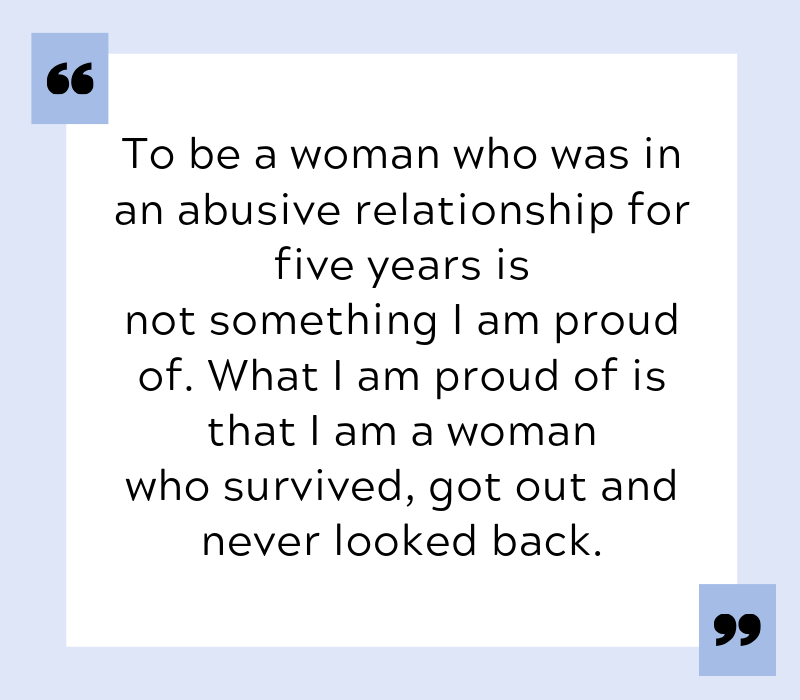 I am Your Neighbour

If someone comes to you and is need, if they are going through abuse, know they are coming to you because they need someone. They need someone who they can trust, they need someone to listen, they need someone who is not going to judge. Just be that person. In my personal journey, I was not ready to make any moves until I was really ready. It was so very, very hard to open up to anyone, but when i did, I was not looking for a scolding or a lecture, I was looking for a trusting person who would just listen, let me cry and ask for help when I was ready. Always recommend the places where they can seek help such as Women’s Crisis Services, be gentle with them, and let them know there are places of safe haven for them.

Together we can save one person at a time.

*Please note that some names and identifying details have been changed to protect the safety and privacy of individuals in the story.