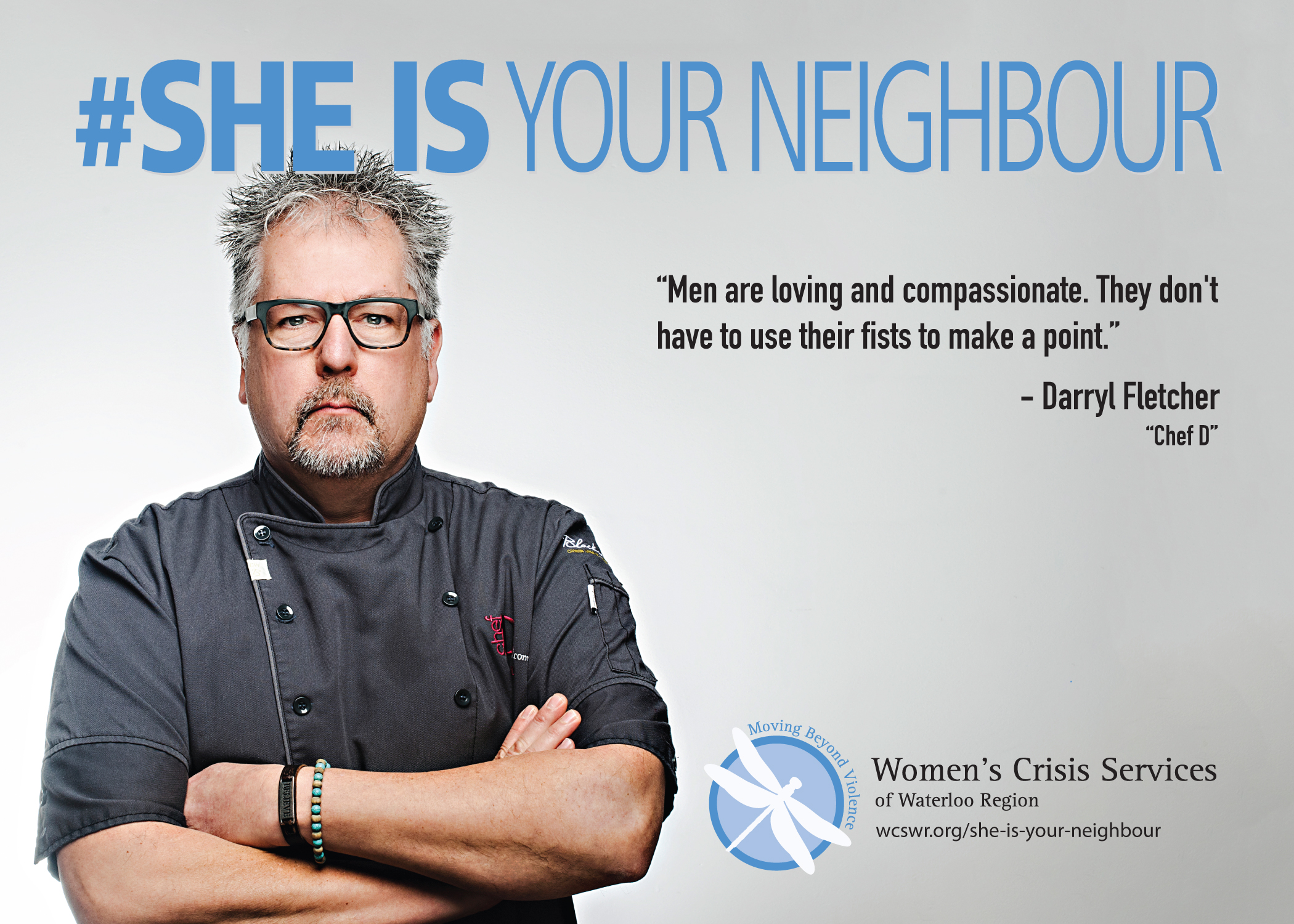 “We’ve just finished filming Season 7 and are getting ready to film Season 2 of ‘At the Cottage with Chef D’, which is really cool,” he said.

He also offers catering services, often preparing meals for artists on tour at larger music events such as London’s ‘Rock the Park’. Some of his past clients include artists such as B.B. King, Stuart McLean, Blue Rodeo, and more.

“You name it, they’ve probably had some of our food,” he said. “Which is really great because they don’t get good food on the road, even though you think they would. So whenever they come through, we always give them the best of the best.”

Recently, he opened a Studio Kitchen and is developing a dinner club membership. The new space allows him to hold special events ranging from weddings to team-building events. “It’s opened a whole new side to our catering business where you can come and have a meeting at our place,” he said.

Chef D has teamed-up with the organization for many events over the years, the most recent being the delicious brunch he provided at this past Mother’s Day fundraiser, “Hats Off to Mom!”

He shared that one of the most impactful experiences he has had with the organization was when he participated in a play held in honour of Woman Abuse Awareness Month (WAAM). In 2015, a one act play titled ‘Rage Against Violence’ was performed at the Dunfield Theatre in Cambridge.

The play featured intersecting storylines that illuminated how different people are impacted by domestic violence. Perspectives ranged from the woman experiencing the abuse to first responders and how it affected their lives.

“I didn’t realize the impact that it had on other people, such as first responders like the police or the nurse looking after injuries, how it affects them,”

“Each one of us had a part to play and I played the nurse. It was very moving. I didn’t realize the impact that it had on other people, such as first responders like the police or the nurse looking after injuries, how it affects them. I just went, this is a bigger issue than what I ever anticipated it to be,” he said.

He explained that the play was very emotional for some of the actors.

“Some of these ladies were abused earlier in their lives so this really brought it back,” he said. “I had the opportunity of seeing firsthand with the play, not only what happens to the ladies that come here, but also how it impacts other people. I had never really thought about it that way.”

Chef D said the play was a great way to introduce domestic violence to the public. “It just really opened people up to the issue. It was incredible to see. You got to see the victim who we don’t always see. It’s not a victimless crime. It really moved me,” he said.

Why We Need to Talk About It

The experience inspired him to continue donating and learning about other ways he can support the organization.

“If I can help by lending my voice to say, ‘Hey, this is a real problem,’ to ensure it doesn’t go unnoticed, that’s why I want to stay involved,” he shared.

Although it can be difficult, Chef D thinks that it is essential that more discussions about domestic violence start taking place.

“It’s something that people don’t want to talk about. If you’re the victim, are you going to go to your neighbours and say, ‘Hey, look at me?’ No, you’re going to hide from it because you don’t want another beating to take place, or you feel that you have to put on a brave face. So I think there’s a lot of times that we don’t see the truth in it,” he said.

“It should be talked about it and it should be out in the open because it affects all of us,”

Chef D said this can make people feel like it’s an issue that is not relevant to them or that they live in ‘too good of a neighbourhood’ for it to be taking place around them.

He clarified, “It happens to people with lots of money and to the very poor. It’s an epidemic, and I think it’s becoming worse in our society, not better. I don’t think it’s going away anytime soon. I think that we should be talking about it more and more, to freely talk about it and open those doors.”

He said he’s happy that organizations like Women’s Crisis Services exist to support women facing the many unknowns when leaving a partner.

“It’s a whole different ball game that a lot of us will never understand. We live in a very affluent society and we don’t know that feeling. To start over again, there’s a fear that comes with that. As well as the fear that the person who did this to me might be able to do this to me again,” he said.

Chef D believes increased dialogue will help more people understand the realities for many women. “It should be talked about it and it should be out in the open because it affects all of us. Not only that, but it affects the kids. The circle that happens, I’d like to cut off that circle,” he said.

He explained that men need to consider the impact of their actions and the influence they can have on boys and young men who look up to them.

“Often the women are the victims, the men are the abusers. I want to show some young person looking up to Chef D or Chief Larkin or Cavell, the coach from the Titans, that these are really positive role models that you can become,” said he said.

“Am I perfect? Not in a million years. But I’m out here to say that this is not right. This is not supposed to be reality. We should be loving, supportive, and deal with our anger issues in another way,” he explained. “Men are loving and compassionate. They don’t have to use their fists to make a point. And I think that’s it. That’s the easiest way to explain why I want to get involved.”

Chef D calls us all to step outside our comfort zones and consider how we can help those around us.

“I think we tend to – and I’m guilty of this just as much as anybody – come home through the front door and not want to deal with the world anymore. But, the world’s out there still,” he said.

He urges people to take action if they believe someone might need support.

“If you notice something changing in a person, open up a dialogue with them or maybe phone your local services, like Women’s Crisis Services or the police if it gets to that,” he said. “I think sometimes we think when we’re phoning the police, it’s always the negative note but they can really help. That is what they’re there for. They are there to build the relationships and build the trust.”

He believes that relationship building is something we can all make a point of doing better. “I think we should all get to know our neighbours. Just be part of your community. That could even be just saying, “Hi”, waving, or that type of thing. You never know the impact of a smile,” he said.

Chef D wants to remind people that there are many ways you can make a difference in someone’s life.

“When it all comes down to it, the community supports us, so why can’t we support the community?” he questioned. “It’s not always about money. Everybody thinks it has to be that you write a cheque. Well no, you could come and volunteer for a dinner, you could do a barbecue to raise some funds that way, or maybe even bring in some gift cards that can help the ladies and their families get back on track again.”

He encourages us to think about our own lives and the opportunities that we have to create change.

“I live a really great life. I have a beautiful wife, I have some amazing kids and an amazing granddaughter. I have recognition, I have a great TV show, I’m living my dream. So if I can share and help out, that’s what it’s all about. That’s always been the mandate of Chef D deep down inside. If I can help show some awareness using my platforms, that’s what I want.”